House Mouse control is our specialty in Winchester. No one wants mice in their house or garage. They contaminate surfaces with their feces, carry harmful bacteria, and their constant gnawing can cause a lot of damage. Here’s what you need to know about their habits and preferences. How you can make your home less inviting to rodents, and how to best deal with their presence. We suggest you always call a professional to have your mouse problem handled correctly.

Droppings, fresh gnawing and tracks indicate areas where mice are active. Mouse nests, made from fine shredded paper or other fibrous material, are often found in sheltered locations. House mice have a characteristic musky odor that identifies their presence. Mice are occasionally seen during daylight hours.

House mice are gray or brown rodents with relatively large ears and small eyes. An adult weighs about 1/2 ounce and is about 5 1/2 to 7 1/2 inches long, including the 3 to 4 inch tail. Although house mice usually feed on cereal grains, they will eat many kinds of food. They eat often, nibbling bits of food here and there.

They are excellent climbers and can run up any rough vertical surface. They will run horizontally along wire cables or ropes and can jump up 13 inches from the floor onto a flat surface. They can slip through a crack that a pencil will fit into (slightly larger than 1/4 inch in diameter). 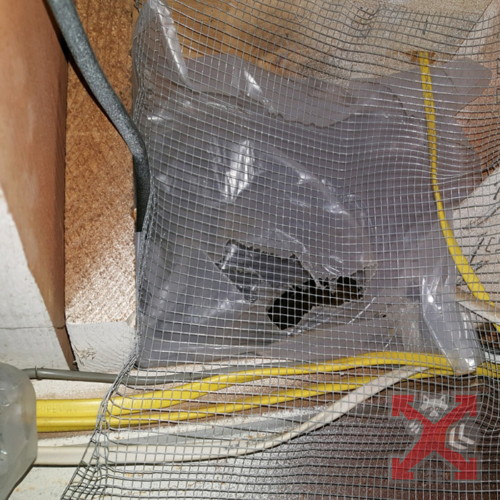 For controlling mice indoors we use traps. The bait should be fastened securely to the trigger of the trap with light string, thread, fine wire, or glue so the mouse will spring the trap in attempting to remove the food. Soft baits such as peanut butter and cheese can be used, but mice sometimes take soft baits without setting off the trap. Leaving traps baited but unset until the bait has been taken at least once improves trapping success by making the rodents more accustomed to the traps.

Place mice traps up against walls, behind objects, and in secluded areas where mouse droppings, gnawing and damage are evident. Snap traps should be oriented perpendicular to the wall, with the trigger end against the vertical surface. Multiple-catch traps should be placed with the entrance hole parallel to the wall. In areas where children, pets, or birds might contact traps, place the trap in a box or use a barrier to keep them away.

One of the alternatives to a snap trap is a glue board. Glue boards work on the same principle as flypaper: when a mouse attempts to cross the glue board, it gets stuck. However, one of the major drawbacks with glue boards and other live-catch type traps is that the trapped mouse may not die quickly, and you will need to kill it.

While trapping is generally recommended for controlling mice indoors, when the number of mice around a building is high, you may need to use toxic baits to achieve adequate control, especially if there is a continuous re-infestation from surrounding areas.